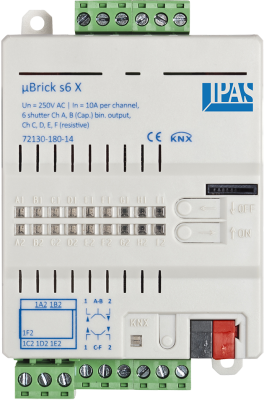 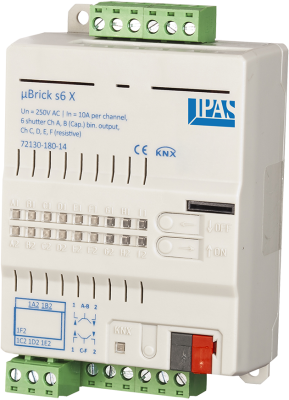 µBrick s6 X is an actuator with 6 output channels (channel A, B, C, D, E, F) for controlling up to 6 blind or shutter drives. In contrast to the other channels, channels A and B are equipped with 10 A C-load relays, so that these channels can also be used for binary switching.

Blind / roller blind application
2 outputs each form a channel (A, B, C, D, E, F) for blind or shutter control. Thus, up to 6 blind or shutter drives can be controlled with one µBrick s6 X. Blind/shutter functions can be operated channel by channel in a mix with binary switching functions. Each channel can be assigned status objects which signal the current position or the end position "up" and "down" (binary). Parameters define the travel time for the up and down movement and for the slat or slot opening for roller shutters. Based on these parameters, blinds and roller shutters can be controlled precisely. Blind/roller shutter channels can be integrated into the internal facade module. For facade control, additional objects are available for the corresponding facade commands up/down, position and slat position. In addition, blind/roller blind channels can be integrated into additional functions of the application module.

Installation and connection
µBrick s6 X is installed on the standard 35 mm top-hat rail or decentrally in suitable installation boxes using screws and has a width of 4 SU. All µBrick channels are supplied with single-phase drive voltage. The outlets of the channel form the control for the two travel directions up/down. µBrick actuators are connected to the KNX bus via the standard bus connector.

Scene module
This module enables the configuration of 10 scenes with a maximum of 8 objects each. 1 Bit, 1 Byte, 2 Byte and 4 Byte objects can be configured as scene objects. Objects can also disable a scene. Any events can start and save a scene. The execution of a scene can also be stopped via an object and a further object enables the restoration of a scene to its original values.

Alarm module
Up to 8 events can be assigned to alarms. These include analogue values such as temperature or binary status objects which, in connection with a threshold value, trigger the alarm. As a typical alarm logic, the function can be set up in such a way that alarms are acknowledged via separate objects.

Operation hours counter
Special objects count the time of closed contacts in order to determine, for example, the running time of a machine.

Timer module
With just a few parameters, easy-to-use staircase functions with running time extensions and expiration warnings as well as switch-on and off delays can be configured. Timers can be activated and de-activated via additional objects.

Logic module
With the logic module up to 35 logic gates can be configured. Each gate has a maximum of four inputs and one output. To select the logic function, “AND“, “OR“; “XOR“, NOT functions, gate functions, mathematical operators such as adders, subtractors, multipliers and dividers, comparators such as “greater than“, “„less than“, “equal to“ and converters for data type transformation are all available. Data point types can be configured depending on the logic function.

Counter
This module makes it possible to count incoming events. Each event can be given a factor, so that it can be counted in relation to a certain value. At the same time, a particular number of events can be assigned to a value. Each counter can be assigned threshold values which will trigger an alarm when the threshold is reached. The counter can be re-set via an object.

2-point controller
The application allows for the configuration of up to ten 2-point controllers. For each controller an activation object, objects for current and set value, heating and cooling mode and a binary controller output are available. In connection with the KNX data point type operating mode, individual controllers can be easily switched on and off.